Big cities are often associated with having little nature, but this idea cannot be further from the truth for New York City. New York is so much more than just a concrete jungle. Not only does New York boast world renowned spots like Central Park, which is home to a host of wildlife, but on a neighborhood stroll, you can also easily be charmed by the beautiful trees and flowers lining the sides of the roads, or even the sneaky racoons —sometimes right outside your apartment. Eight out of ten days the weather is so beautiful that my phone is filled with pictures I took of the bluest skies, fluffiest clouds and pinkest sunsets.

After nearly 3 months of being on pause due to the pandemic, New York is gradually opening its public, outdoor places, so it’s been amazing to finally step outside my apartment and enjoy what New York has to offer.

One positive that comes out of the shutdown is a break from the relentless harm done by human activities to the environment. You may have heard of the unusual scene of the canals of Venice teeming with fish or air pollution levels observed by satellites showing drastic improvements in countries like Italy and China as industrial activity and traffic have been cut down significantly.

Will all this revert back to the pre-pandemic state if cities reopen? Probably. But there is also a lot that we can do to help alleviate the impact of climate change — and it’s more pressing now than ever.

The late physicist Stephen Hawking warned that we could face the greatest challenge in the history of humanity within 100 years due to climate change and that we are close to the tipping point where global warming becomes irreversible. He remarked adamantly, “Climate change is one of the great dangers we face, and it’s one we can prevent if we act now.”

Having reversed deforestation in Costa Rica by 50%, along with other efforts to save the planet, president Alvarado Quesada made the thought-provoking comment, “We are going to live longer in this world and see the most devastating effects of climate change. And when we grow older, people are going to ask us—did you do enough about it? So we need to start answering that question today, now.”

In March this year, New York City finally introduced the plastic bag ban. It’s a huge relief to see stores not handing out multiple unnecessary plastic bags by default. Still, it may be a long way until all the needed policies and regulations for the environment are in place. Until then, each one of us can contribute by being kinder to our one and only planet.

When I see people use only disposable plastic utensils and plates out of convenience, neglect to recycle or turn off unused lights and appliances, or litter in the ocean, it’s really hard not to worry about our future on earth. It makes me feel my effort for the environment is being cancelled out every minute.

However, what tough times like this pandemic have taught me is to do my part, and be hopeful. My favorite quote about optimism by filmmaker Guillermo Del Toro goes, “Optimism is most needed in the face of despair—just as a car is most needed when there is a distance to close. Otherwise it is a large, unmovable object parked in the garage.”

I believe that there are more of the younger generation like Greta Thunberg. I believe that more people who did not hitherto feel the urgency of protecting our earth, have started to in light of both recent natural disasters caused by climate change such as the bushfires in Australia, and the turmoil resulting from Covid-19. The scale of change the supervirus has forced upon us has made it easier to imagine the once unthinkable, and has hopefully made more people willing to invest in a brighter, collective future. If more and more people become aware—acutely aware—of what should be the priority, and educate one another on how to tackle the impact of climate change together, the people who take action could outnumber those on the other side—thus rendering their carbon footprints negligible.

We can’t give up now. We owe too much to all the Greta Thunbergs of the world who are bravely protesting in the streets for their future on earth. It’s easy to sit back and tell ourselves that our individual effort is too small to matter, so as to justify lazy behavior. Let’s face it. Recycling or not shouldn’t be a belief for you to choose to have. The need for us to battle for our shared home is not just important, it is necessary, for our own survival.

More often than not, change finally takes place when enough people whom a particular issue concerns—and in this case, it concerns everyone—march vehemently on the streets and make their voices heard. So you and I, whose power is as tiny and insignificant as it seems, do matter.

Isn’t earth breathtakingly beautiful? Don’t give up on her yet. 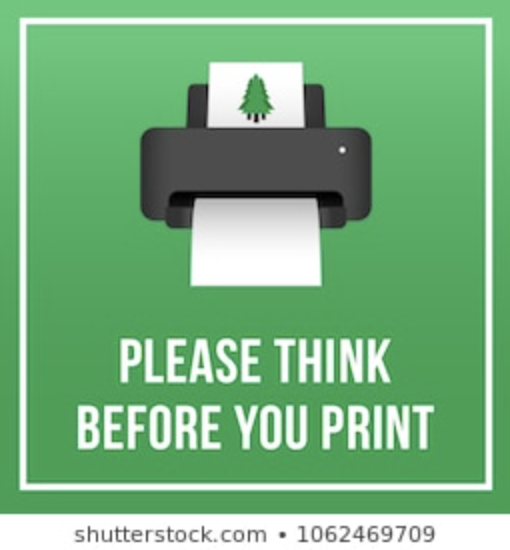 Offices and institutions print too much paper unnecessarily, even with the availability of digital alternatives.

While you consider getting a reusable shopping bag, try reusing the million plastic bags you already have.
…

*Loren Chih-Ping Lin is an international student at Manhattan Language, where she is currently honing her (already impressive) English skills, and learning art in New York, a city that she considers the most “artistically messy” place in the world. She loves puppies, funny sitcoms, bagels, and Broadway shows. She is originally from Taiwan.

View all posts by Manhattan Language